Every now and then on theITbaby when we have absolutely nothing to write about, or are sick, such as is the case tonight, we go through and find the best that Amazon has to offer in the way of nerd or geek onesies.

This post is no exception to my lackluster attempts at fighting a cold and fulfilling a blog promise, so I present to you the top x onesies I could locate on Amazon in January of 2014 that we haven’t already showcased.

It’s long titles like that that are killing me…

You can click any of these to go to the Amazon page to purchase, and if you don’t want me getting any referral  money on them remove the last 13 characters from the URL.

With Dungeons and Dragons turning 40 this year, and your baby probably being at least 40 weeks from conception, what better way to celebrate a life of difficult choices in the hands of an unmerciful dungeonmaster than a character sheet onesie.

He who shall not be named might dislike this, and your fundamentalist Christian mother-in-law who doesn’t quite get that this is not actually promoting the dark arts, but I think most people are going to enjoy a little HP reference. 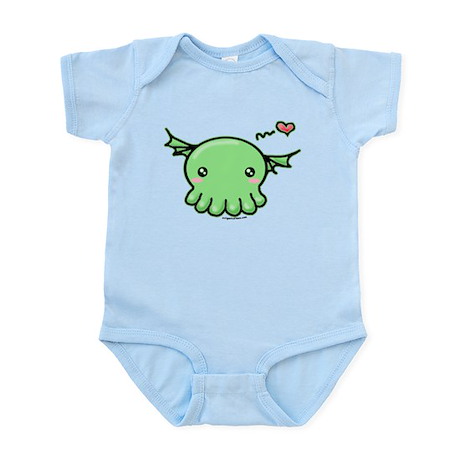 What better way to say “I love you,” than by giving them the gift of foreknowledge of Cthulhu. When the elder god rises from his house at R’lyeh to eat us all, your baby will know that the way to go is to be eaten first rather than watching the world be cleansed by armies of demons from beyond hell.

If you’re unfamiliar with HP Lovecraft and wondering what this is all about, click here. 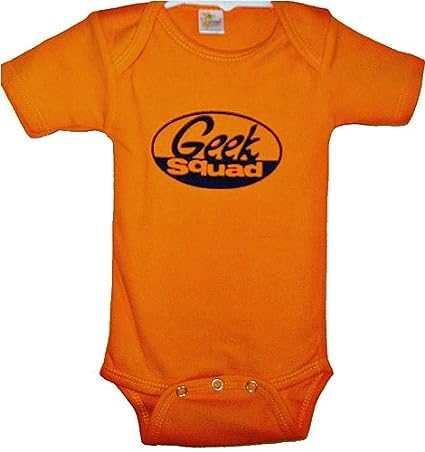 I’ve probably mentioned this Onesie before, but if you have a computer technician who’s recently had a baby and want to infuriate them, there’s no better gift than a Geek Squad Onesie.

It’s hard to explain to people who aren’t computer technicians, but in baseball terms if your friend plays for the Mets, the Geek Squad sells banana flavored ice cream at a nursing home.

I’m sure there are exceptions, but I haven’t run into them as I get hired quite often to clean up what they’ve messed up and then attempted to sell product.

What can’t hit the broad side of a sandcrawler with a BlasTech E-11 blaster rifle? That’s right, your little stormpooper. This onesie should always serve to remind you of two things. The first is that the Empire’s daycare options didn’t turn out to be that good of a deal, the second is that if you don’t change that diaper you’re liable to get a Dianoga running around up in there, and that’s not good for anyone.

Want to say to the world that your baby is never going to have sex and will be stuck at a giant ice wall waiting for an undead hoard of snow zombies to eventually attack? This Game of Thrones Onesie might just do the trick for you.

Somehow I feel there’s a joke about every odd numbered Star Trek movie sitting in plain sight, but I can’t see it.

I originally thought this was some sort of marijuana reference, but evidently it means a sort of Zen-like acceptance of things, the kind of thing you learn when you have a screaming pile of sad baby who can’t be consoled.

If you’re looking for a onesie to really tie your collection together, this might be it.

Nothing quite says your child is wondrous, brilliant, and will always be alone and everyone he or she loves will age and die as she grows old, eventually losing all that is herself to regenerate as a new person entirely, forgetting who she was.

This onesie goes to eleven. That’s one louder. Don’t smell the glove though… just don’t do it.

I think someday we’ll look back at Apple’s app store and laugh at this line. For now though it’s just text on a onesie in a slightly angled font.

That’s all I have for tonight, enjoy!